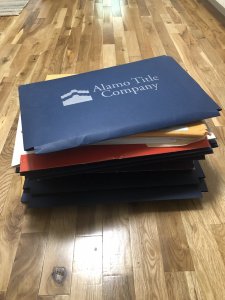 We were looking through those big folders you get after you buy a house today, in preparation for a class we’re teaching on property management.  We found a few surprises.  Things time has blurred.  It turns out that it was three years from the time we turned my bachelor pad into a rental to the time we bought our second property.  Two more years until we bought the next one.  And then the momentum began to pick up.  And this all occurred as deals got harder to find and prices increased.

It was a reminder that if you wait for the perfect time to get started, you’ll never get started.  Interest rates will be too high.  Or prices will be.  Or we’ll be on a downswing in prices.  Or an upswing.

For instance, in 2009 there were cheap houses everywhere.  This would be the perfect time to buy up a portfolio, right?  Well banks were collapsing and no one was lending money so unless you had capital or private money, you probably couldn’t take advantage of the sale.

Now I hear everyone talking about prices being too high and us being at a peak in the market cycle.  They are probably right.  But loans are still fairly easy to get and rates are crazy low.  The fed just dropped rates again.  This could be reflected in mortgage rates soon.  It also may increase buyers’ buying power by allowing people to afford a payment on a little higher-priced property than they otherwise would have been able to buy.  In other words, cheap loans allow people to buy more expensive houses.  This is how that “stimulus” works.

When we started out on this adventure we were sure that rates were at all-time lows and wanted to load up on our ten conventional loans as quick as we could.  Our goal was ten houses before retirement.  That happened much faster than we had planned and we raised our goals.  But rates are still crazy low.  Timing the market rarely works but our basic strategy held up and mediocre deals we bought back then off the MLS seem like home run deals now.  Were we smarter than most?  Absolutely not.  We were just focused and willing to take a chance and, more importantly, take action.  We didn’t get distracted from our strategy of buy-and-hold despite the temptation.  We flipped a few houses along the way and just recently we’ve gotten into owner financing and lending private money but not until we were very sure of our primary strategy.  And our focus is still buy-and-hold.  We love long-term holds.  Is that pretty obvious by this point?

So the point of this piece is that this game is like moving a train.  It takes a lot of energy to get it moving.  But it slowly builds and then it’s hard to stop (and I don’t know why anyone would want to).  So if you can get the train moving sooner than later you’ll find it easier and easier to build momentum.

As we looked over these closing files and reminisced over what all we learned and what contributed most to the geometric growth after a slow start, we came up with what were the most impactful pieces and we wanted to share those.  There are a few things that really helped add momentum and I would recommend finding ways to get to these points sooner than we did.

Private money was a big one!  Once we had access to private money, everything sped up.

Time.  Reserving some time to evaluate deals and go to networking events and dedicate to the business.  Hint: The Miracle Morning is a great book if you don’t know where to find time amidst your busy life.

Education.  Going to classes, listening to podcasts, and learning to evaluate deals gave us more confidence in what we were doing and gave us the confidence that we could protect those private lenders’ money.

Finding deals.  As good deals became tougher to find on the MLS, we had to find off-market deals.  Getting good at this is the single biggest skill I would suggest to someone starting out.  If you can find deals, you will have the money you need.  And if you don’t know what to do with it, you can bird dog it or refer it to someone else in exchange for a fee and the ability to look over his or her shoulder.

Team.  Until you’ve found your own team members, you can borrow some from friends.  They may not offer up their main contractor if they are keeping the contractor in work but they may offer some ancillary tradespeople like HVAC techs or electricians.  They also might not offer up their private lender but you never know.  We have our title company that we use for everything.  Selina Garza and Antonio Pedraza at Alamo Title on Paesanos Parkway in San Antonio keep us on schedule and help us succeed.  Shannon Collier at Gateway Mortgage knows conventional loan requirements for investors like the back of her hand.  These people are the people that help us avoid surprises at closing.  Robert Villa at Security Service has helped us with our 15 year fixed investor loans in excess of our first ten conventional loans.  We’ve used others and we’ve been surprised at closing or had major delays.  We stick with those who help us succeed.

Stepstone.  In Texas there is a brokerage for people like us.  Investors.  It is called Stepstone.  When Veronica decided to quit her W2 job and run this business she got her real estate license.  She joined a traditional brokerage that did not understand our goals or support them.  Shortly after, she found Stepstone.  This was a complete game changer.  While I don’t think having a license is a necessity to be successful in this business, it has been very helpful as we started doing more deals each year.  The biggest benefit was the network that we got plugged into.  These other investors taught us a lot about the business.  Some also became lenders on our deals and now we’re lending to some of them too.  This environment gave us a statewide network to lean on and ask question of when we encountered something we had not seen before.  They also treat business partners of their agents like team members and we get all of the same perks of being affiliated with this group as the agent does.

Guru training works for some people but it wasn’t for us.  If you are the type of person that needs a coach to have the confidence to get started then, by all means, do it.  Just choose wisely who you give your money to.  We don’t believe there are any magic secrets out there that one person has discovered to make you a millionaire over night.  All of the information is out there.  Gurus just package it nicely and offer motivation and perhaps a network of vendors.  We do have friends who went the guru route and are very successful and we have other friends who went the guru route and are not successful.  It’s not a magic pill.  If I were getting into large apartment syndications as a syndicator, I’d probably pay some serious money for the best training as this is a complex strategy with a lot of responsibility for other people’s money and a lot of legal landmines one could step on if they aren’t careful.  But for single family, we decided that the 20,000 dollars some friends spent on guru training could be a down payment on a house.  Or perhaps it would be money we’d lose on a bad deal and we’d still consider it “tuition” as my 94 year-old grandmother calls financial losses that we pay for but that we learn from.

So if you can get some of these things sooner than we did, you will likely build momentum faster than we did.  We write this to help contribute to your momentum.  But you have to start to get this train moving or all the education and private lenders are useless.  If you buy some break-even property today at these rates and just hold it as a rental and do nothing else, you will eventually have some equity.  And you will have more options.  But if you find a great deal and if you save a little from your paycheck too, you’ll have even more options.  And sooner.  When you start to bring several positive actions together, the momentum builds faster and faster.  If you need help analyzing deals or getting money, consider partnering.  Give away some value and you will gain experience and education.

I like looking back to see where we’ve been and take that information to think about what I’ll see in the future looking back at right now.  What I see is that we were very cautious at first until we got comfortable in this business and had some experiences behind us.  Getting out of our comfort zone paid dividends.  Now when I feel like I’m in a little over my head, I take it as a sign that I’m on the right track.  Staying in your comfort zone will likely keep you where you are.  I suggest that we all step out of our comfort zone just a bit and see what we can accomplish.

Let’s take action this week to move that train just a bit.  The next bit will come easier.  So let’s stay focused on our next goal so that we look back on today glad that we took action rather than wishing that we had done something a little uncomfortable to get us somewhere a lot better.  Stay positive, be happy, and “Keep the Main Thing the Main Thing!”