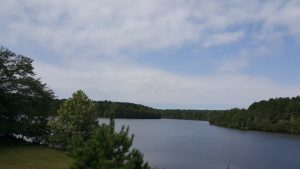 I grew up bass fishing on my Grandaddy’s pond.  It was surrounded by tall pine trees and it had a spillway in the middle.  It was down a red dirt road.  It smelled like fish slime; or maybe the boat did, but that is what I smell in my memory.  It smells like heaven to me.  Those steamy summer days in Georgia, learning the lessons of life from Grandaddy, were magic.  I thought I was learning how to catch bass but now I know that I was learning much more.

My parents divorced when I was in high school and my mother had to adjust her standard of living.  She was an instructor at the University of Texas in San Antonio with a perfect 4.0 GPA through her Master’s degree studies.  She is one of the smartest people I know.  She had years of experience and yet, when I started the fire academy (without a bachelor’s degree) I was making more money than she was.

She began renting a small bungalow in a nice neighborhood.  The house was dated but safe.  She knew she had found a bargain and she stayed until the landlord sold the house and she had to move—this time to a tiny house where, on Sunday nights, the lowriders would cruise through the neighborhood to the sound of booming bass and the hydraulic cylinders pressurizing and releasing.  This was the late 90’s.  I don’t say this as a judgement statement or to stereotype lowriders.  Most of these people were good people who were car enthusiasts and just having a fun night out.  But for a kid from a small rural town on the outskirts of the city, I hadn’t seen anything like it before and I worried about her safety.

After a year or so, the original  bungalow became available for rent again and she jumped at the chance.  The bungalow had a rear garage apartment where another tenant lived.  One night, my mom told her dad, by telephone, how she wished she could remove the sliding glass shower doors and just put up a curtain.  He said “I think you should.”   She said that she couldn’t because it was a rental.  He said she could because it was her house.  “Let’s just call it a Christmas present!”

Can you imagine?  What relief that must have brought—to both of them.  Years later, when he passed away, I know he had peace in knowing his daughter, who had worked hard and done all the right things, was going to be living in a nice, safe home.  This is my why.

Grandaddy was a soil conservationist for the government.  A civil servant.  However, he managed to acquire some land in a fast growing county in Georgia.  While he drove an old Oldsmobile and his fiberglass boat only had a trolling motor, he owned the lake that the boat floated on.  At the time, I didn’t realize what a big deal that was.  I guess I figured that everyone had a family member with a small lake in the middle of piney woods.

As the area grew, he decided to sell the lake and the acreage surrounding it to a developer.  It turns out that he had a silent partner and that this lake was an investment.  It just happens to have been a fun investment for the best bass fisherman I’ve ever known.  Turns out the other partner didn’t like to fish.  Today the lake is surrounded by manicured lawns and beautiful homes.  I hope it still smells like fish slime though.

When he took his profits, he would have a large tax bill so he decided to do a 1031 tax exchange.  This allows the owner to re-invest the profit in more real estate and to effectively delay the payment of taxes if the seller follows all of the IRS rules.  This allowed Grandaddy to buy a large piece of acreage in a town in which he saw signs of growth, a post office, and probably most importantly, a small safe bungalow in Texas.

Just like that the most important woman in his life and mine had her life changed and she had a safe place that she could update and enjoy living in.  She also became a landlord to the tenant in the garage apartment, providing a real financial bonus as she earned additional income from rent.  This house has well over doubled in value in the twenty years since Granddaddy bought it.

Now I have a beautiful wife and I am raising a son and daughter that light up my life like I know Grandaddy’s little girl lit up his.  I chose a career that is very rewarding but won’t make me rich.  I don’t care much about cars or fancy houses.  My value is in time spent with my family.  I learned that investing in real estate could protect wives and kids from some financial hardships.  I found out that having old cars and trolling motors make it possible to buy lakes.  And lakes can help you buy houses.  And houses can protect the most important thing in life—family.  This is why I choose to invest in real estate.

The purpose of writing this blog is to help others, who may be interested, to understand that they can do this too.  There are a lot of ways to invest in real estate.  My way is different than Grandaddy’s way.  Your way may be different, too, but real estate is accessible to normal folks and it can be a lot of fun.  I hope that my kids follow their passions as my mom did and as I did and as Grandaddy did.  Real Estate allows me to follow my passion in a career I love, firefighting, and still provide security for my family.  My wife is my rock and if I should be gone tomorrow, I know that she will be able to care for our family because of real estate.  It’s not for everyone but if you want to pursue it, it helps to establish your “why.”  My why is imperfect and beautiful and six and eleven and forty and we still sometimes smell like fish slime—just not nearly often enough.